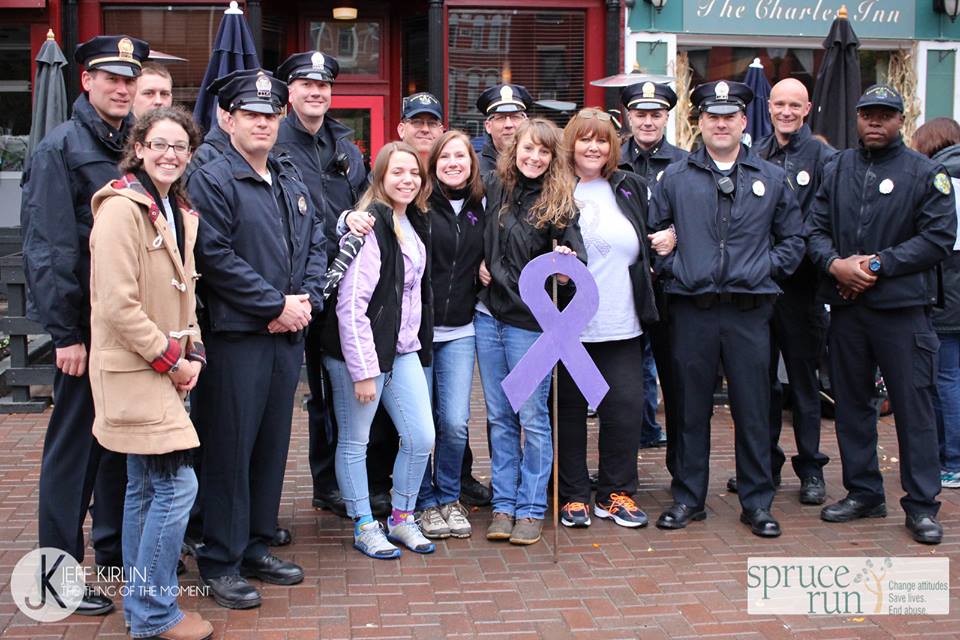 Support within our Community for Domestic Violence Awareness 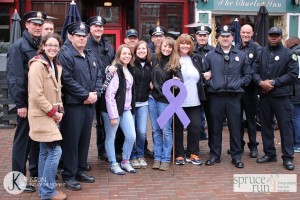 Alliance staff with members of the Bangor Police Department at the Bangor Walk to End Abuse on October 22nd.

October marks Domestic Violence Awareness Month (DVAM) across the country. At Spruce Run-Womancare Alliance, this month is a very busy time of year: the calendar is full of presentations, interviews and many different campaigns and programs going on throughout Penobscot and Piscataquis counties.

I recently joined the team as an intern at the Alliance and am extremely excited to be jumping in during such a busy time of year that involves so much of the communities help to raise awareness.

The month started off strong on Sunday, October 4th with the Race to End Domestic Abuse in Guilford.

At 9 am, an astounding 150 community members gathered together in a school parking lot for one common cause: to help raise awareness and put a stop to domestic violence. As a first time volunteer for the race it was a very moving morning to witness so many people from the community taking time out of there busy weekend schedules to come together for a cause that is so close to many peoples’ hearts. This year was the 19th year this race has taken place, and this year’s turn out and fundraising totals were some of the strongest ever.

The event also included a wonderful pancake breakfast that would not have been possible without the help of a heroic team of early-rising volunteers, as well as a raffle consisting of many different gift cards from local businesses. The local support from everyone in town shows just how much awareness has grown within the last 19 years this event has taken place. It was an inspirational morning to be a part of for everyone involved and Spruce Run Womancare Alliance is extremely excited for the 20th annual Guilford Race next year.

On Wednesday, October 7th, I once again hit the road with other staff and volunteers from the Alliance. This time we were heading to Lincoln, for the second walking event of DVAM 2015, the 5th annual Lincoln Walks to End Abuse. 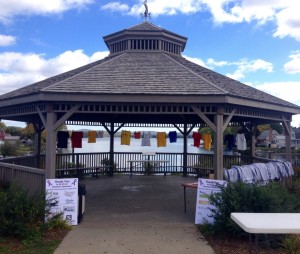 T-shirts in the Clothesline Project displayed at the Lincoln Gazebo during the Lincoln Walk to End Abuse on October 7th.

Just as in Guilford, the support to end domestic violence was huge within the community. Downtown businesses showed their support with Spruce Run-Womancare Alliance posters, flyers and ribbons, while 140 people came together at the gazebo in the center of town.

At the gazebo, the Alliance displayed its Clothesline Project. This display shows T- shirts made within the community by people who have directly or indirectly been affected by domestic violence. Each shirt represents a different kind of domestic abuse in the hopes to continue the conversation of violence against women and to help survivors and those who care about them heal. The shirts hung all around the gazebo created an amazing back drop for a touching and inspirational night.

Just before the walk, everyone gathered together in the gazebo for a candlelight vigil and a recitation of the names of each person in the state of Maine who has died as a result of domestic violence this year. Knowing that most people holding a candle that night knew of a person who had been a victim of domestic violence and was there in the gazebo to show their support made it a very touching moment.

After this emotional moment, all 140 people walked through downtown Lincoln to demonstrate their support for raising awareness and putting an end to domestic violence.

On October 22nd, the third and final Walk to End Abuse for 2015 took place in downtown Bangor.

Being a Bangor resident myself, I was extremely excited to see such an amazing turn out for the event despite the not-so-great weather we had that day. Perhaps one of the best moments of the day was when the Bangor Police Department showed up to the event with such a strong presence. It was fantastic to see them gathering and supporting for such an important issue within the community. Overall, the event was very successful, people from all around Bangor came together in West Market Square to listen to speakers, a walk around downtown, free t-shirts and lunch.

Raising awareness within the Penobscot and Piscataquis communities is not something the Alliance can do alone.

Throughout October and the rest of the year we spend time participating in dozens of community-organized events, fundraisers, and presentations.  Each of these events can create new momentum, inspire someone to speak out or speak up about their experiences, and supports our organization’s services throughout the year.  All in all, my first year as a part of DVAM has been inspirational as I have seen the efforts and emotional connections made in so many areas.